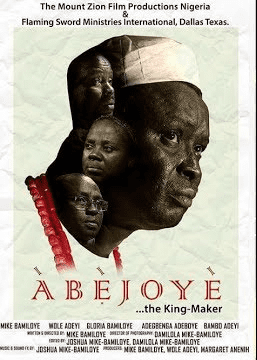 Olugbeja Mi is the theme song of the powerful Nigerian Christian movie Abejoye. Olugbeja Mi was produced by Joshua Mike-Bamiloye, known by many as JayMikee. Listen, download, and enjoy!

Abejoye was written and produced by veteran Nigerian Christian film writer and actor, Mike Bamiloye. The movie is a collaborative piece by The Mount Zion Film Productions, Nigeria, and Flaming Swords Ministries International, Dallas Texas. “Abejoye” was initially released in parts, later, subsequent releases came out in series with episodes.

The movie was certainly expected in some quarters because so far, a season of Abejoye has been shown in December for 3 years now. Season 1 was premiered in 2017, Season 2 in 2018, Season 3 in 2019 and Season 4 in 2020. Currently, the movie is on its 5th season, featuring actors like; Mike Bamiloye, Gloria Bamiloye, Wole Adeyi, Bambo Adeyi, Adegbenga Adeboye and many others.

Check out other movies by Mount Zion Film Productions here